UPDATE: looks like this study has been retracted. I’ll post more, when I know more about why. 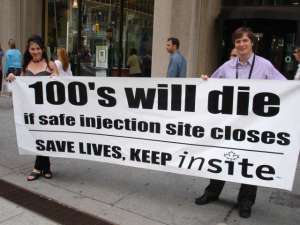 A new meta-analysis of research on supervised injection sites delivers some disappointing conclusions for advocates:

One of the aims of MSICs (Medically Supervised Injection Centres) is to reduce harms associated with injecting illicit drugs such as heroin under unhygienic conditions. The current research suggests that the extent to which these aims have been achieved are at best modest.

How can this be?

Here’s what the authors say:

How can these surprising and sometimes counter-intuitive results be explained? There are at least two potential explanations. First, MSICs have been found to attract the most problematic heroin users . . . Second, MSIC clients might remain part of local injecting subcultures. In other words, they might be obtaining the benefits of MSICs, while at the same time continuing to inject in public and semi-public environments. There is some evidence to support this assumption.

Why is this noteworthy?

Insite, North America’s first MSIC, was opened about 15 years ago.

Over that 15 years, the approach has enjoyed vigorous support from public health, harm reduction advocates, and drug policy experts. There’s been a steady stream of publications to support their effectiveness.

Observers who questioned their effectiveness or whether they were the best use of scarce resources were often met with dismissive responses about science, evidence, empiricism, compassion, and challenges to presumed moralizing impulses.

This reaction has only intensified, despite other potential explanations for reduced disease transmission rates, reasonable questions about whether other approaches might save more lives, acknowledged “slight” drops in mortality rates, the absence of a recovery orientation in the coverage, and increasing OD rates in the region. There’s also been little willingness to discuss their animating beliefs and assumptions.

Why the discrepancy with past studies?

Well, first off, maybe the rhetoric hasn’t matched the actual evidence. Their description of the evidence is more mixed and narrow than you’d expect from coverage:

German Lopez got reactions from various researchers and ended with this observation from Keith Humphreys:

“If you are an advocate, you could say correctly that if we assume these are effective, we do not have sufficient information to confidently overturn that presumption,” Humphreys said. “But it’s equally true if you took another view — just look at it as a cold, scientific question — you could say we also don’t have the evidence to overturn the presumption that these don’t make any difference.”

That word “advocate” is important. It’s worth stepping back and considering what they advocate for. They are advocating for a philosophy, an approach, and a program.

This gets lost in a lot of these discussions and they get framed as advocates for science, research, evidence, empiricism, and compassion. A problem is that this framing sets up questioners as opposed or indifferent to those things.

Turns out that hasn’t been fair.