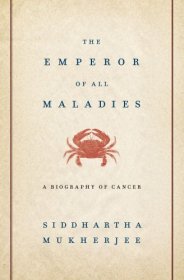 Throwback Sunday – I thought this old post on parallels between cancer, oncology, addiction, addiction treatment and recovery would be a good pairing with yesterday’s post on professional attitudes toward difficult to treat illnesses.

I’ve been reading The Emperor of All Maladies and I’ve been very struck by the parallels between the is philosophical and practical challenges faced by cancer and addiction researchers, advocates and practitioners.

One of the pioneers of cancer research, treatment and advocacy faced difficult decisions about whether to disclose his own illness:

Proud, guarded, and secretive—reluctant to conflate his battle against cancer with the battle—Farber also pointedly refused to discuss his personal case publicly.

The rhythms of hope and despair

the clinic seemed perpetually suspended between two poles—both “wonderful and tragic . . . unspeakably depressing and indescribably hopeful.” On entering the cancer ward, Goldstein would write later, “I sense an undercurrent of excitement, a feeling (persistent despite repeated frustrations) of being on the verge of discovery, which makes me almost hopeful.

“The mood among pediatric oncologists changed virtually overnight from one of ‘compassionate fatalism’ to one of ‘aggressive optimism.’”

“ALL in children cannot be considered an incurable disease,” Pinkel wrote in a review article. “Palliation is no longer an acceptable approach to its initial treatment.”

The zeal and necessity of the advocates:

She had found her mission. “I am opposed to heart attacks and cancer,” she would later tell a reporter, “the way one is opposed to sin.” Mary Lasker chose to eradicate diseases as some might eradicate sin—through evangelism. If people did not believe in the importance of a national strategy against diseases, she would convert them, using every means at her disposal.

The tension between the patient’s welfare and the professional and intellectual needs of the doctors and researchers:

“There is an old Arabian proverb,” a group of surgeons wrote at the end of a particularly chilling discussion of stomach cancer in 1933, “that he is no physician who has not slain many patients, and the surgeon who operates for carcinoma of the stomach must remember that often.” To arrive at that sort of logic—the Hippocratic oath turned upside down—demands either a terminal desperation or a terminal optimism. In the 1930s, the pendulum of cancer surgery swung desperately between those two points.

Political feminism, in short, was birthing medical feminism—and the fact that one of the most common and most disfiguring operations performed on women’s bodies had never been formally tested in a trial stood out as even more starkly disturbing to a new generation of women. … It was as if the young woman in Halsted’s famous etching—the patient that he had been so “loathe to disfigure”—had woken up from her gurney and begun to ask why, despite his “loathing,” the cancer surgeon was so keen to disfigure her.

“We shall so poison the atmosphere of the first act,” the biologist James Watson warned about the future of cancer in 1977, “that no one of decency shall want to see the play through to the end.”

The demands of caring for patients with such an all-consuming illness:

As Carla’s doctor, I needed to be needed as well, to be acknowledged, even as a peripheral participant in her battle. But Carla had barely any emotional energy for her own recuperation—and certainly none to spare for the needs of others. For her, the struggle with leukemia had become so deeply personalized, so interiorized, that the rest of us were ghostly onlookers in the periphery: we were the zombies walking outside her head.

“To some extent,” he wrote about his patients, “no doubt, they transfer the burden [of their disease] to me.”

The daughter looked at me as if I were mad. “I came here to get treatment, not consolations about hospice,” she finally said, glowering with fury.

The fear and existential implications of cancer:

Will you turn me out if I can’t get better? —A cancer patient to her physician, 1960s

The pull of palliative care:

As trial after trial of chemotherapy and surgery failed to chisel down the mortality rate for advanced cancers, a generation of surgeons and chemotherapists, unable to cure patients, began to learn (or relearn) the art of caring for patients. It was a fitful and uncomfortable lesson. Palliative care, the branch of medicine that focuses on symptom relief and comfort, had been perceived as the antimatter of cancer therapy, the negative to its positive, an admission of failure to its rhetoric of success.

The movement to restore sanity and sanctity to the end-of-life care of cancer patients emerged, predictably, not from cure-obsessed America but from Europe.

she encountered terminally ill patients denied dignity, pain relief, and often even basic medical care—their lives confined, sometimes literally, to rooms without windows. These “hopeless” cases, Saunders found, had become the pariahs of oncology, unable to find any place in its rhetoric of battle and victory, and thus pushed, like useless, wounded soldiers, out of sight and mind.

Saunders responded to this by inventing, or rather resurrecting, a counterdiscipline—palliative medicine. (She avoided the phrase palliative care because care, she wrote, “is a soft word” that would never win respectability in the medical world.) … she created a hospice in London to care specifically for the terminally ill and dying, evocatively naming it St. Christopher’s—not after the patron saint of death, but after the patron saint of travelers.

“The resistance to providing palliative care to patients,” a ward nurse recalls, “was so deep that doctors would not even look us in the eye when we recommended that they stop their efforts to save lives and start saving dignity instead . . . doctors were allergic to the smell of death. Death meant failure, defeat—their death, the death of medicine, the death of oncology.” Providing end-of-life care required a colossal act of reimagination and reinvention.

Saunders refused to recognize this enterprise as pitted “against” cancer. “The provision of . . . terminal care,” she wrote, “should not be thought of as a separate and essentially negative part of the attack on cancer. This is not merely the phase of defeat, hard to contemplate and unrewarding to carry out. In many ways its principles are fundamentally the same as those which underlie all other stages of care and treatment, although its rewards are different.”

A hint of recovery-oriented palliative care?: [emphasis mine]

Opiates, used liberally and compassionately on cancer patients, did not cause addiction, deterioration, and suicide; instead, they relieved the punishing cycle of anxiety, pain, and despair.