Someone sent this document today and highlighted this statement, “The evidence of the effectiveness of MAT is overwhelmingly positive. 115, 116, 117”

The first source, 115, really just introduces and refers to the other two sources, 116 and 117. It may be worth noting that the word “recovery” appears zero times in each of the two articles.

I have not reviewed the second source, 116, but will try to do so in an upcoming post. However, the authors summarize the post with this table: 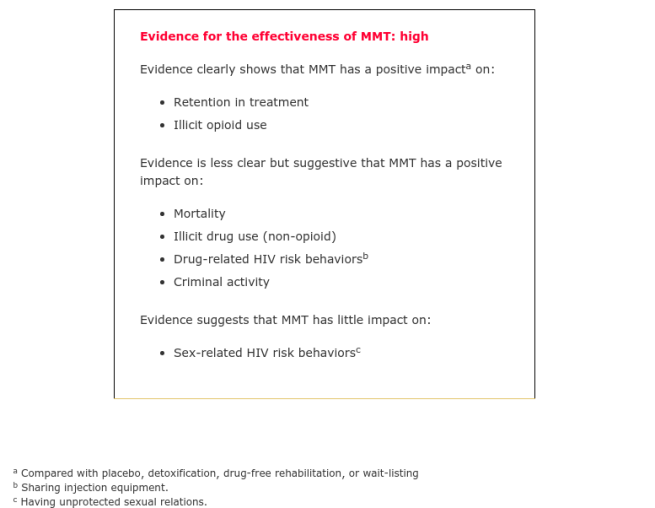 The third source, 117, was reviewed in a previous series of posts. I’ll re-post the first in that series below.

A closer look at the evidence

This meta-analysis provides a review of the 19 studies and a summary of each.

Let’s look at the studies. Some of them consider the effects of various doses and other factors. I’m just going to report on the outcomes above.

The summary reports “fewer positive urine drug screens”. I wanted a little more info, so I went to the original study. It doesn’t report exact percentages, but I found this graphic.

This study compared buprenorphine vs high-dose methadone vs low-dose methadone and it was a year long (that’s really good!). Here’s the summary: “At 26 and 52 weeks, the high-dose MMT group had better retention (31% versus 20% at 52 weeks, p=.009) and less opioid use (p=.002) than the low-dose MMT or fixed-dose BMT groups.”

I was curious about “less opioid use” and went to the original study. The researchers did drug screens for opioids and other drugs. “Urine samples were considered to be opioid-free if the test reading was less than 300 mg/mL.” For patients that were retained for all 52 weeks there were 156 drug tests. This outcome was measured by giving 1 point for each opioid-free test. A single patient got 156 points. The median scores were 59 for high-dose methadone, 16 for buprenorphine, and 24 for low-dose methadone.

This study compared different doses of buprenorphine. “For retention, 40% in 1-mg group completed treatment, 51% in 4-mg group, 52% in 8-mg group, and 61% in 16-mg group.” 61% retention sounds more encouraging, but over what period of time? Unfortunately, it’s only 16 weeks long.

The summary also reported that the “8-mg group had significantly fewer positive screens than the 1-mg group”. This got me curious about these drug use outcomes.

Here’s what I found:

The original study also had the following sentence, “Acceptance of the efficacy of buprenorphine as a maintenance treatment has to be tempered by the reality that the drug use status of many patients will not be altered by buprenorphine.”

This study compared buprenorphine maintenance in a primary care setting vs buprenorphine delivered in a methadone clinic. The study is short (12 weeks) and small (23 subjects per treatment condition).

Here’s the summary: “A trend toward higher retention at 12 weeks was noted in the primary care setting (78% versus 52%, p=.06). Patients in that setting had significantly lower rates of illicit opioid use as measured by urine drug tests (63% versus 85%, p,.01) but no difference in rates of cocaine use.”

And, the better outcome for drug use was 63% of drug screens being positive for opioids. (I went to the original paper and found that 30.5-38.5% of tests were positive for cocaine.)

The closest they came to measuring abstinence was this, “The proportion of patients who achieved 3 or more consecutive weeks of abstinence from opioids, as determined by thrice weekly urine toxicology testing, was also higher in the primary care setting (44%, 10 of 23) than in the drug treatment setting (13%).”

Note: This is not an argument against access to any kind of care. It’s just a push for good informed consent that empowers patients to advocate and choose for themselves.

Other posts in this series