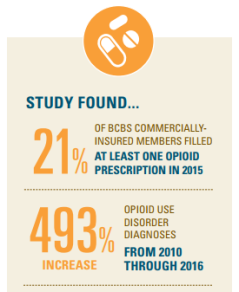 Blue Cross Blue Shield issued a report on the opioid crisis with their data from all members in their commercial plans.

Early in the document, they report a pair of striking numbers.

First, that 21% of members filled a prescription for an opioid in 2015. I’ve heard these kinds of numbers before, but I never get numb. That’s 1 in 5 members, despite growing attention to excessive prescribing of opioids.

Second, a 493% increase in diagnosis of opioid use disorders over 7 years. My reaction is that this has to reflect changes in coding or diagnostic practices rather than the population. It’s implausible that there was an increase this large in the number of people with an opioid use disorder.

The document then devotes a great deal of attention to opioid prescribing.

Toward the end, there are a couple of graphics that caught my attention.

First, a map showing rates of opioid use disorders.

So . . . they note that New England has average rates of opioid use disorders, yet they have high rates of utilization of medication-assisted treatment.

This caught my attention because New England has higher rates of overdose, as depicted in the CDC graphics below.

(It’s worth noting that BCBS is not among the top 3 insurers in Maine or New Hampshire, but they are the biggest in Massachusetts and Vermont.)

It begs questions about what the story is, doesn’t it?

I don’t presume to know the answers.