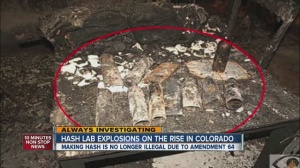 Interesting. I assume that this will lead to regulation that will benefit big marijuana.

When Colorado legalized marijuana two years ago, nobody was quite ready for the problem of exploding houses.

But that is exactly what firefighters, courts and lawmakers across the state are confronting these days: amateur marijuana alchemists who are turning their kitchens and basements into “Breaking Bad”-style laboratories, using flammable chemicals to extract potent drops of a marijuana concentrate commonly called hash oil, and sometimes accidentally blowing up their homes and lighting themselves on fire in the process.

The trend is not limited to Colorado — officials from Florida to Illinois to California have reported similar problems — but the blasts are creating a special headache for lawmakers and courts here, the state at the center of legal marijuana.