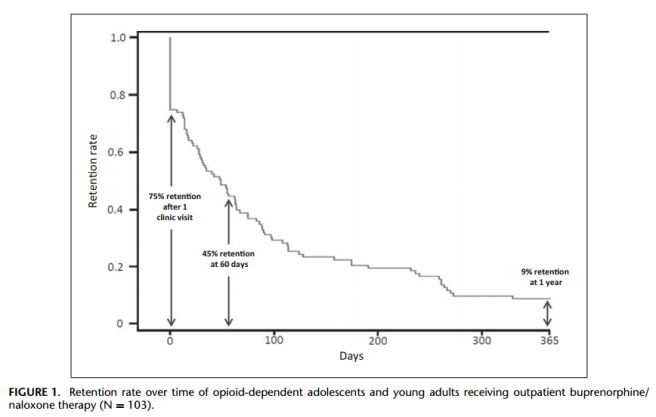 A new study on office-based treatment of adolescents with  Suboxone was just published by the Journal of the American Society of Addiction Medicine.

The bad news, most folks stopped coming to the clinic:

Program retention was the major barrier to treatment success (Fig. 1). After 1 visit, 75% returned for a second visit. At 60 days, 45% of patients were still retained, and by 1 year 9% were retained and still active in the program.

This would appear to undermine arguments for buprenorphine as a strategy for preventing overdose deaths.

These retention problems don’t stop the authors from putting a positive spin on it:

We submit these retention rates as preliminary benchmarks against which other approaches might be compared. Considering the chronic relapsing nature of addiction, long-term opioid substitution therapy with BUP/NAL should gain wider acceptance. Outpatient BUP/NAL should be seen as an important component of adolescent and young adult opioid addiction treatment.

Unfortunately, now that this is published, this spin will be used to frame this treatment as evidence-based.